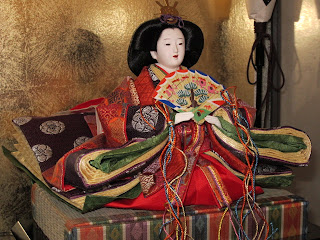 Once a year I put out this set of Hina dolls to celebrate "Hinamatsuri" or "the Hina dolls festival" on March 3. It is a festival for girls and wishes are expressed for their future happiness.
Customarily, hina dolls were sent by a mother's parents as a present when a girl baby was born. And these dolls were sent by my parents when my daughter was born 28 years ago. Considering the space for the dolls, I chose a set of only two dolls rather than that of gorgeous seven tiers. 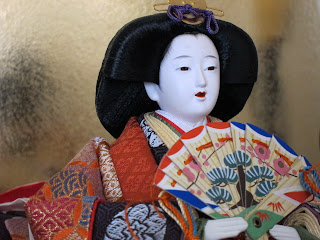 This custom of displaying dolls began during the Heian period (8th century~12th century). In the past, people believed dolls had the power to contain bad spirits. And this festival dates back to an ancient Japanese custom of doll floating, in which straw hina dolls were set afloat on a boat and sent down a river to the sea, supposedly taking troubles or bad spirits with them.
Later during the Edo period (17th century~19th century), fabric Hina dolls wearing beautiful Heian nobility costumes appeared and they became popular and more gorgeous. 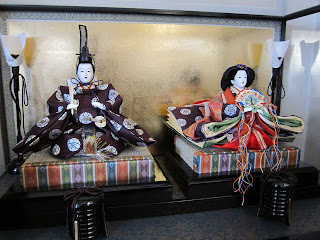 These dolls represent the Emperor and the Empress. The placement of a couple is different between the  western  (Osaka and Kyoto) and the eastern Japan ( Tokyo). The traditional arrangement had the male on the right from the viewer's perspective. But in the enthronement ceremony in 1926, Emperor Showa stood on the left side according to the Western style. Since then, the doll industry in Tokyo changed the arrangement in order to show their respect to Showa Emperor.On the other hand, Osaka and Kyoto preserved the former style.
But I forgot the story when I arranged this afternoon. I displayed the dolls according to the picture in the box. This is Tokyo style display. Never mind. 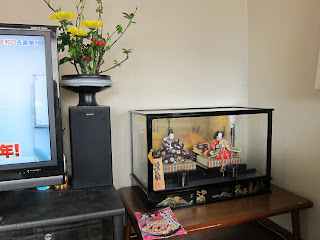 If my daughter has a girl baby next time, these dolls will be sent to her house for the baby. By that time, I will keep and display them every year. For my grandson Rintaro, we are planning to present a carp streamer for boys festival in May.
Posted by beagleAnnie at 5:21 PM