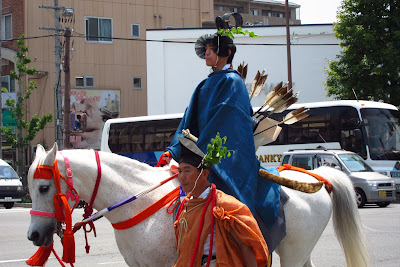 This is the report of Aoi Festival held yesterday on May 16th in Kyoto. Basically it is annually held on May 15th, but due to the heavy rain, it was postponed to the following day.

Aoi Festival, or Hollyhock Festival is the annual festival of Shimogamo Shrine and Kamigamo Shrine. Along with the Gion Festival and the Jidai Matsuri (Festival of Ages), it is one of the three big festivals in Kyoto. Featured is a gorgeous parade in the style of the ancient Heian Court, everything in the parade is adorned with the hollyhock leaf crest, also called "aoi" _ thus the name of the festival. The parade leaves the Kyoto Imperial Palace at 10:30 in the morning. The 700-meter-long parade passes Shimogamo Shrine and heads for Kamigamo Shrine. This festival offers the opportunity to see the ancient time in Japan, so it makes a great tourist attraction. 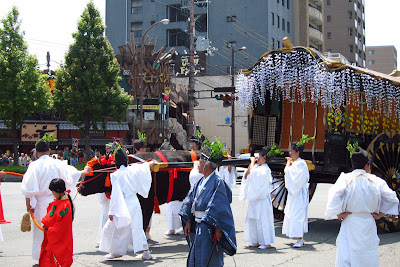 Nowadays, the massive procession illustrates the high regard. There are men on horseback, giant bouquets of flowers, ornately decorated ox drawn carts, and a large retinue of women in kimono accompanying the year's Saio.

I had a great time to watch the ancient time. I want to add one more thing. This parade is held without music, just quietly and solemnly.

Posted by beagleAnnie at 5:41 AM