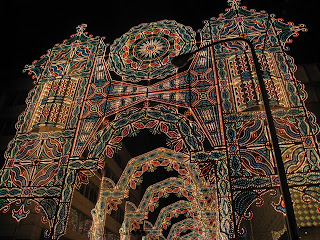 Yesterday I went to Kobe to see "Kobe Luminarie" with my husband,  which is now a seasonal light festival held in Sannomiya, Kobe city. I have long wanted to see it with my own eyes. I have known this event only by TV news . Although I had to line up from JR Motomachi Station to the entrance gates for 40 minutes, it was worth waiting.
This above pic is the entrance gates. The next three shots are of the main plaza in Higashi Park south of Kobe City Hall. 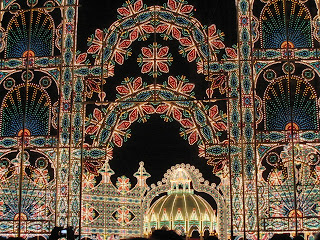 Kobe Luminarie is a light festival held in Kobe every December since 1995 to commemorate the Great Hanshin Earthquake.
On January 17th of the year, a devastating earthquake hit Kobe in the early morning. Over 6,000 precious lives were lost and the vast area of Kobe city were burned down and destroyed.
Kobe Luminarie started to console the spirits of the victims and symbolize the strong passion of Kobe people to recover from it. It was a bright message of hope. 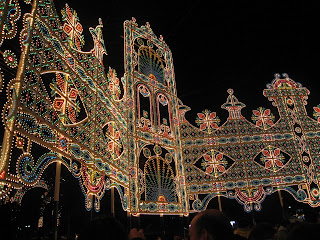 Every year over three to five million people flock to the center of Kobe city to see the fabulous light displays.
This year from December 1st to 12th (today is the finale), the festival has been held from the sunset to 9:00 pm. This year's theme is "Luci di speranza" or "Rays of Hope". About 200.000 electric bulbs are used this year and I hear each light is individually hand-painted. Major streets in the vicinity are closed to auto traffic during these hours to allow pedestrians to fill the streets and enjoy the lights. The basic format has remained mostly the same with the entrance gates, the main plaza in the park and a number of displays next to Flower Road. 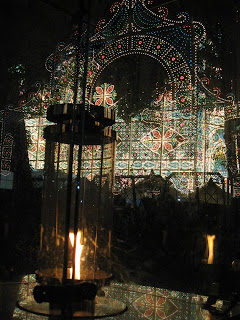 This gaslight is called "1.17 Light of Hope" which has been lit since five years after the quake.
The next blue display is in the fountain plaza. These bulbs are LED ones to save electricity. I love the reflection in the fountain water. 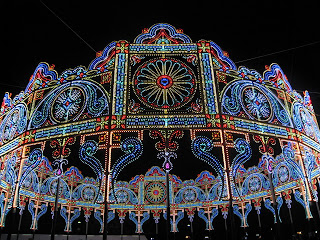 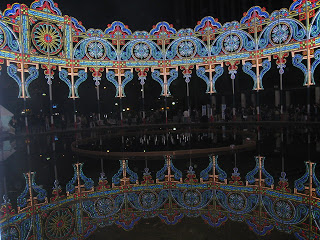